Daniel Buren is known as a radical reformer of contemporary art. For EMMA he has conceived a unique total work that has taken over EMMA’s gallery space. The exhibition will also feature a selection of Buren’s iconic interventions and event-based pieces from his extensive career for the first time in Finland. Buren’s Going for a Walk in a Zigzag will kick off EMMA’s programme for 2022, which is themed under the theme of The Crystal Ball. Throughout the year, EMMA will highlight a line-up of artists renowned as visionaries of their time.

Daniel Buren (b. 1938) regards every space as being full of possibilities. In a career spanning six decades, this pioneering French artist has challenged conventional ideas about art with his ephemeral, site-specific, boundary-pushing works critiquing art institutions. Buren is a widely acclaimed artist and winner of numerous major awards including the Golden Lion for best pavilion at the Venice Biennale in 1986. One of his most famous permanent public works, Les Deux Plateaux – more commonly known as the Colonnes de Buren – is located in the inner courtyard of the Palais Royal in Paris.

Curated by EMMA’s Arja Miller and Simon Friese, director of Denmark’s Creator Projects, Buren’s Going for a Walk in a Zigzag invites visitors to navigate a zigzagging maze.

“We are extremely proud to bring Daniel Buren’s exhibition to the Finnish public. This exhibition is internationally newsworthy, not only by virtue of it marking the debut of an expansive new in situ piece by Daniel Buren at EMMA, but also in that it provides a broad overview of event-based pieces by one of the most influential names in contemporary art,” says curator Arja Miller.

Folding Screens (Les Paravents) is a site-specific piece created by Buren exclusively for EMMA’s space. Drawing inspiration from the museum’s open, horizontal space and 100-metre-wide window, the work consists of a maze of giant, colourful folding screens and Buren’s signature exploded cabins (cabanes éclatées), which create surprising new spaces and varying views in which the viewer is immersed. 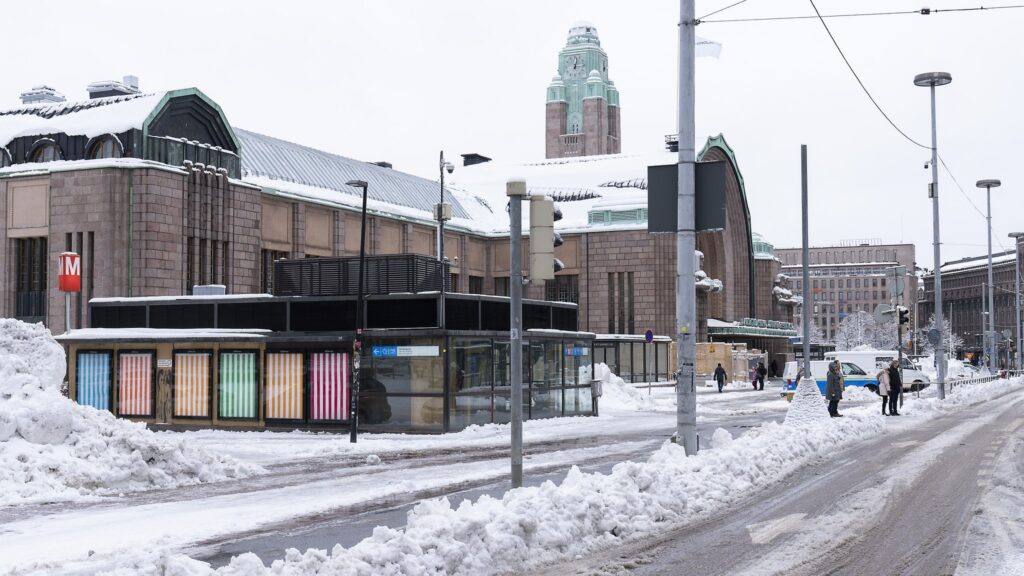 A week before the opening, Buren’s signature vertical stripes enlivened Helsinki’s and Espoo’s winter landscape on over 300 JCDecaux billboards across the two cities. Buren is known for his practice of using 8.7 cm-wide vertical stripes as a visual tool to reveal hidden aspects of familiar spaces.

Also featured is Ployer/Déployer, an open-air piece of 105 striped flags to fill Espoo’s Tapionaukio square in May. Buren’s famous stripes will additionally appear on the sails of optimist dinghies competing in a regatta on Nuottaniemi Bay in a piece called Sail/Canvas – Canvas/Sail (Voile/Toile – Toile/Voile), organised in collaboration with the Espoo Pursiseura Yacht Club EPS.

Striped vests will transform the museum’s customer service personnel into a living part of a work called Heteroclite Essay: Vests (Essai hétéroclite: Les Gilets, travail situé). The personnel will wear striped vests throughout the duration of the exhibition.

EMMA’s uniting theme for 2022, The Crystal Ball, is a metaphor for visionary insights, creative dreams, and the special gift that artists possess for anticipating what the future holds in store. Daniel Buren is a contemporary art visionary who has created over 3,000 exhibitions for various sites and venues around the world.