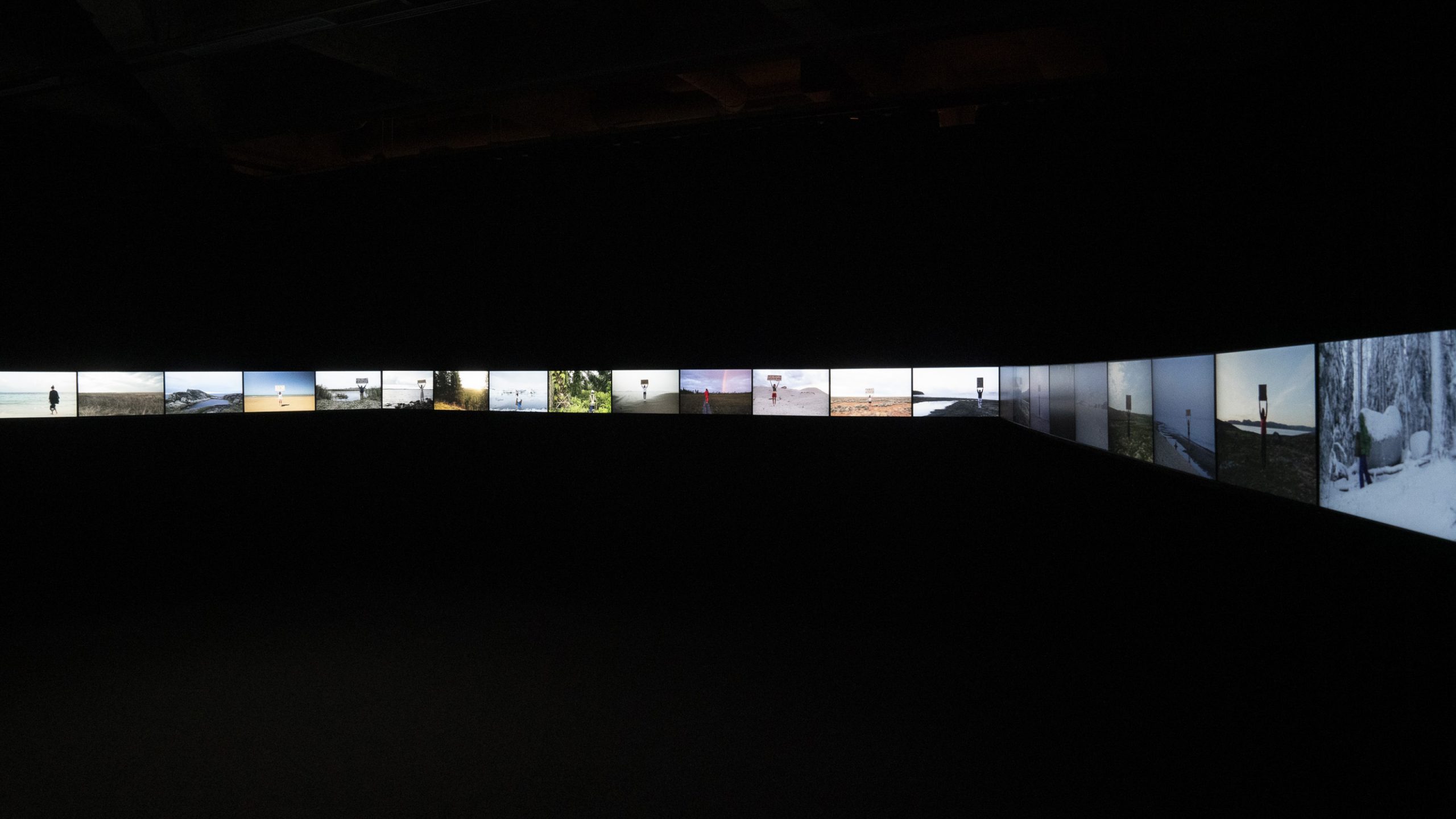 For those yet to be (2016–2018) by Young Artist of the Year 2019 Nastja Säde Rönkkö is a series of video performances investigating emotions in relation to ecological destruction. The project features Rönkkö visiting fragile parts of the globe that are threatened or destroyed by human actions and sending messages to future generations by using the language of a political protest. Get to know the individual videos and texts below.

We drank we swam we breathed

In 2016 Florida declared a state of emergency over an outbreak of algae that originated from Lake Okeechobee. The algae caused miles of waterways, wetlands and seacoasts to be swamped with toxins endangering the marine environment and already fragile ecosystems. The algae are caused by waste flow from agriculture, cattle ranches and farms.

The ice we left you with

The ice fields in southern South America are rapidly losing volume even at the highest elevations. The southern and northern Patagonian ice fields are the largest mass of ice in the southern hemisphere outside of Antarctica.

Paws you will not touch

The Ice in Svalbard is an integral part of the ecosystems, the society and the land itself. Around 60% of Svalbard’s land area is covered by glaciers. The Norwegian Polar Institute has been measuring the mass balance of selected glaciers in Svalbard since 1967. Svalbard’s glaciers have retreated from their maximum positions in the 1920s. Some glaciers that used to calve in the sea now end far inland. There is a mass glacier retreat in Svalbard that severely alters and disturbs the Arctic ecosystem.

Extinct species you will study

According to the WWF, on a global scale an area the equivalent size of 300 football fields of rainforest is cleared each hour to make way for palm oil production. Deforestation is pushing many species to extinction. A third of all mammal species in Indonesia are considered to be critically endangered and the country has lost 72 percent of its intact forests.

The sea that swallowed your shores

As the climate warms up some countries may physically cease to exist as the land they are made of is at risk of being swallowed up by rising seas. As the flattest country on Earth, the Republic of Maldives is extremely vulnerable to rising sea levels and the majority of its land area will most likely be underwater by the end of this century.

The space we took

The 3340km2 ranch in Texas is one of the biggest ranches in United States and in the world. Animal agriculture is the primary source of environmental destruction such as global warming, deforestation, pollutants, water use and ocean dead zones.

Global warming is severe in the Arctic. The area is warming at a rate of almost twice the global average. Sea ice is said to disappear in the summer within a generation, causing sea level rise, marine ecosystems collapse and extreme weather worldwide.

The being you will not know

Climate change and ocean acidification have nearly killed the largest living structure on earth. The 25 million year old reef is called the most impressive marine area in the world, containing more biodiversity that the entire Europe. Mass-bleaching caused by greenhouse gases is the main cause of the death of the reef.

All the things we discovered

The 1986 accident at the Chernobyl nuclear power plant in Ukraine, former Soviet Union, affected ecosystems all over Europe. Animals and vegetation in forest and mountain areas had absorbed large amounts of radiocaesium, with persistent high levels in mushrooms, berries and game.

Talvivaara gypsum pond leak in 2012 is one of the worse mining disasters of our times. Since then the company has failed to fix the leak and the ongoing poisonous chemical waste cocktail has resulted in an ecological collapse.

The things we had

Norilsk Nickel, Russia has long been called the most polluted city in Russia. It is declared one of the top 10 worst-polluted places in the world by the Blacksmiths Institute due to pollution and leaks from its factory and mine. Nickel produces large amounts of worlds nickel, copper and palladium used widely in objects such as cellphones and radiators.

Glaciers you will not speak

Melting glaciers are one of the most visible signs of climate change.  Sólheimajökull is a textbook example of how fast the melting occurs: over a century it has lost 2.2 sq.km of its front part, and it has been retreating the equivalent to the size of an Olympic swimming pool annually.

Green deserts you will roam

A large proportion of the expansion of the palm oil industry occurs at the expense of biodiversity and ecosystems in the countries where the oil is produced. The industry is linked to major issues such as deforestation, habitat degradation, climate change and animal cruelty. The land and forests must be cleared for the development of the oil palm plantations.

The radiation you won’t escape

In 2011 three nuclear reactors melted down in Fukushima, Japan, resulting in one of the largest releases of radiation into the water in the history of the world. Radioactive chemicals leaked into the Pacific Ocean and more contaminated water will most likely be released into the ocean in the future as well. Fukushima has contaminated vast areas of the Pacific Ocean. The nuclear disaster could easily be one of the worst environmental disasters in human history.

Viiankiaapa is a large bog with a unique ecosystem, a rich variety of species and a huge nickel and ore deposit. Despite being under Natura 2000 protection Anglo American mining company is likely to gain permission for a mine.

Deep into the earth we went

Picher is a ghost town and former city. It was a major national centre of lead and zinc mining and was subsequently destroyed by mining waste. The waste is piled into huge mounds of toxic artificial hills that have polluted the water and air in the area.

The beasts we raised

Oil sands are huge deposits of bitumen that are turned into oil. The process causes widespread environmental damage such as the pollution of the Athabasca River, toxins in the air, health hazards and greenhouse gas emissions.

Excessive, ongoing land use is damaging and destroying the Kalahari Desert’s ecosystem and native tribes at rapid speed. Contributing issues are for example cattle farming, diamond mining and the impact of human activity, primarily safaris. Particularly affected areas are, for example, the Okavango Delta wetlands, a Kalahari hotspot.

The colours we changed

The 2015 Gold King Mine waste water spill was an environmental disaster that began near Silverton, Colorado, when an accidental release of 3 million gallons of toxic waste originating from the mine spilled into the Animas river. The spilled waste which contained mercury and arsenic turned the river yellow and spoiled its water. A year later the spill still hadn’t been properly fixed.

The oil we spilled

The lungs we spoiled

The Amazon rainforest is the world’s largest intact forest. The region is home to 10 percent of all plant and animal species known on Earth. The rainforest plays an essential role in controlling the entire planet’s atmospheric carbon dioxide levels. In the last 40 years, the Brazilian Amazon has lost more than 18 percent of its rainforest to illegal logging, soy plantations, and cattle ranching. Most of the remaining forest is under threat.

Furs you will not pet

The Greenland ice sheet is melting faster today than at any point in the last 350 years, according to a new study in the Nature journal (lead by Luke Trusel). The research is the first continuous, multi-century analysis of melting and ice sheet runoff, one of the largest drivers of sea level rise globally. It concluded that the melt rates are off the charts and that there was a 50 percent increase in total ice sheet runoff water compared to the start of the industrial era.

The Siberian permafrost is thawing at rapid speed. Permafrost last melted some 130,000 years ago, but this time the rate of melting is unprecedented and results in massive leakages of methane (CH4) which is a potent greenhouse gas roughly 30 times more harmful to the climate than carbon dioxide (CO2). Under normal conditions permafrost binds carbon in the earth regulating the amount of carbon dioxide in the atmosphere. In the case of Siberia, this equation is being reversed. A self-reinforcing feedback loop is created whereby climate warming causes permafrost to thaw, releasing even more carbon, which in turn produces greater warming. The formation of the crater-like holes will have crucial ramifications for Siberia’s communities and the environment at large. One theory suggests that the holes are created when trapped gases explode. Carbon dioxide and methane, both greenhouse gases, are released in the process.

The Baltic sea is said to be one of the most polluted seas in the world due to industrial waste, pollution, agriculture and traffic.

An ongoing oil spillage in the Komi Republic, Russia, is considered to be devastating to the environment and potentially worse than the BP oil spill in the Gulf of Mexico. The Russian Government and Gazprom are accused of hiding the real damage and numbers.

Opportunity of a meltdown

Climate change is opening up the Northern Sea Route faster than ever expected. Industry and politicians praise the idea to build a 500 km railroad from northern Finland to Norway’s Barents Sea coast. Sami people, among others, are concerned that such a railroad would go through the Sami lands without regard for their rights, damaging the environment. Access to ice-free waters via the Barents Sea is seen as a way to boost Finland’s export from an area believed to hold huge mineral resources. The railroad would link Finland to a future trans-Arctic shipping lane through increasingly ice-free waters at the top of the globe.