We can’t believe we still have to protest this shit

The White Exhibition is the show we had to make, that we couldn’t escape. It is a defeat that it is even necessary at all, that this subject is so intrusive that we need to address it – over and over again, that we still have to protest this shit. We still live in challenging times. For it is not a new subject, not for anybody, not for us.

To us, the exhibition marks the provisional culmination of many years of working with skin colors and hierarchical structures, of power and powerlessness; investigating white hegemony in search of its replacement…whatever that might be. It is an ongoing process of learning, of trying to understand, to even see what is going on – for being white means to be normalized to a degree that it is almost impossible to see beyond, to look at things from other perspectives. White is not neutral. White people are socialized into a deeply internalized sense of superiority.

This structure, this system, we are reacting against prevails globally, locally, spreading into every corner of our Western societies, into our hearts and minds, to an extent that it seems almost natural. And it is reproduced every day. It is difficult to identify, especially from this white, privileged, Scandinavian position that we occupy. We keep ending up at a dead end. It is mined territory to navigate.

We are sometimes asked if we are the right people to talk about these things, if we shouldn’t hand the microphone to others, to those who have a genuine experience of oppression of which to speak. Yes, today we do need to give priority to persons whose voices have been silenced. But as risky as it is, we too need to speak, for our silence would make us complicit with an oppressive system. We do not see it as an either-or. We are all trapped in this system, some suffering incomparably more than others, some not even aware that the feeling of being entitled to privileges or access is something not everybody has; that societal change is needed.

We see it as a common fight that grows much more powerful if there is space for a variety of voices and experiences to enlighten and expose, from all possible angles. It is a shared responsibility to not leave the problem to others, to become aware of your own position in these structures; it is certainly also a white issue.

The White Exhibition nods to the White House, the White Album, White Supremacy, the White Cube – to this notion of the non-colored ultimate. To white men conquering the world. To white people setting the standard. To whitewalling and whitewashing.

The exhibition certainly addresses the white collective from a white perspective, which again sets the white in the center. We don’t deny the paradox. But our goal in The White Exhibition is exposure and exaggeration, overidentification and distortion, to lay bare the underlying system, to showdown the machinery of which we are all part. The installation concept resonates with the brutalist architecture of the museum. The brutalist style that, with its massive monochrome concrete bones fully visible, is known to expose structures that are usually hidden. 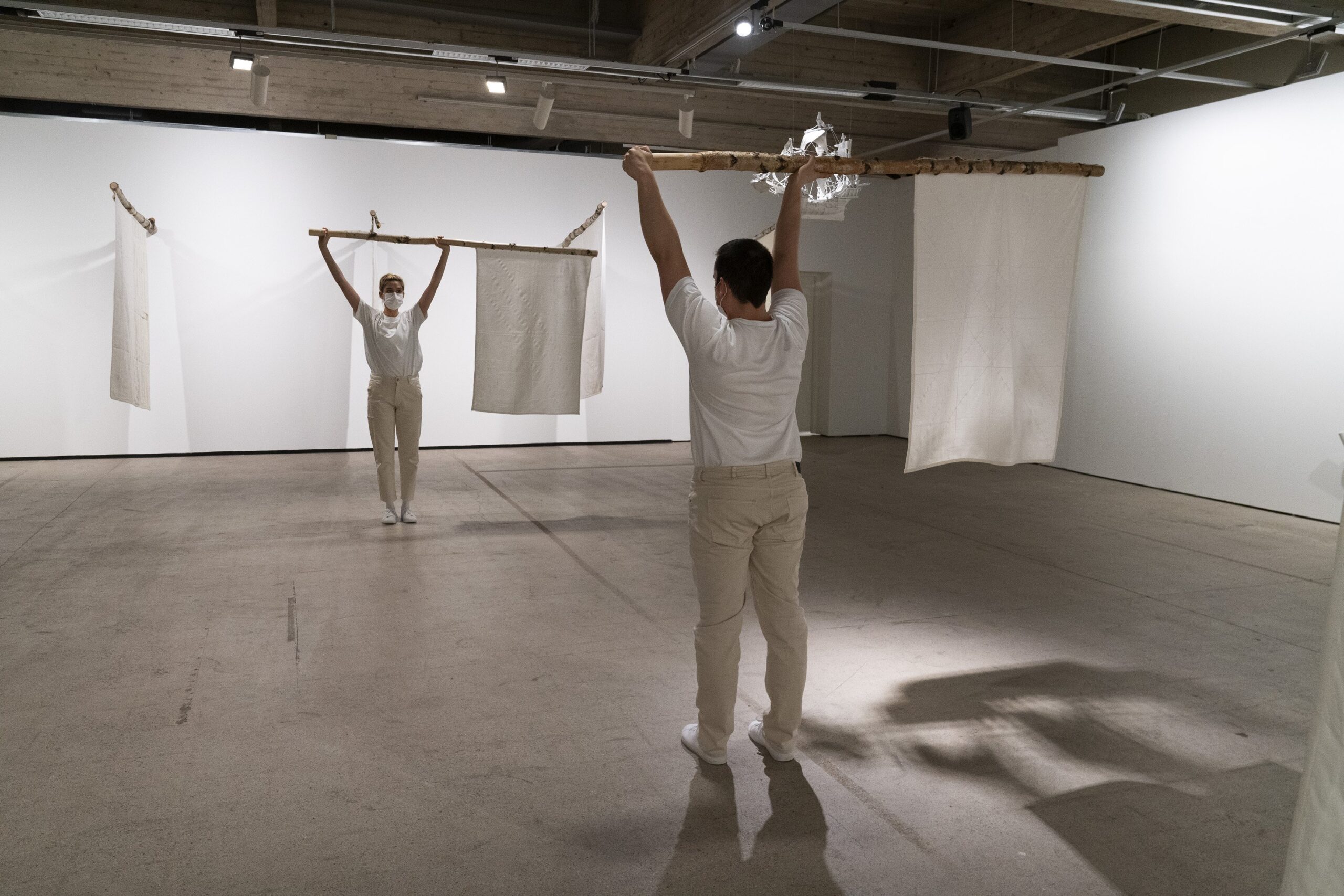 The installation revolves around loads of white textiles, arranged in stacks and piles and in constant displacement, as well as white quilted flags. The heavy flags, reminiscent of old heraldic flags, hang on birch trunks mounted on the walls, introducing a sinister presence to the room.

At the heart of the exhibition is a durational performance going on throughout the three months of the exhibition. The performance is built up around varying ambiences, around conflicting and changing feelings toward the white scenery in which the bodies of the two young performers are trapped. They act in silence, alternating with trumpet music, moving between the humble backroom and the formal front room, they iron and wash the floors and walls with white textiles, they parade and honor the flags, they fight the fabric and engage in a liberating ritual. Over and over again. This cycle of identification, reproduction, fight, and subsequent liberation is repeated incessantly, as an incantation.

The exhibition includes a series of broadsheet artworks published in the local Länsiväylä newspaper, which will be delivered directly to the homes of the citizens of Espoo during the exhibition. It is a gesture of invitation, to engage the community to come see the show and participate in the conversation.

The newspaper artworks add words and language to the otherwise word-less exhibition. The pages take the form of riddles, rebuses, crosswords, or Scrabble boards, as if someone were trying to solve and clarify the issues, to understand and make sense of the complex and contradictory connections. The sheets suggest that everything is interconnected, that the discussion is not a simple one, but a whole complex of voices, situations, cultural habits, and feelings in the overall system, that we are all part of, whether we like it or not. 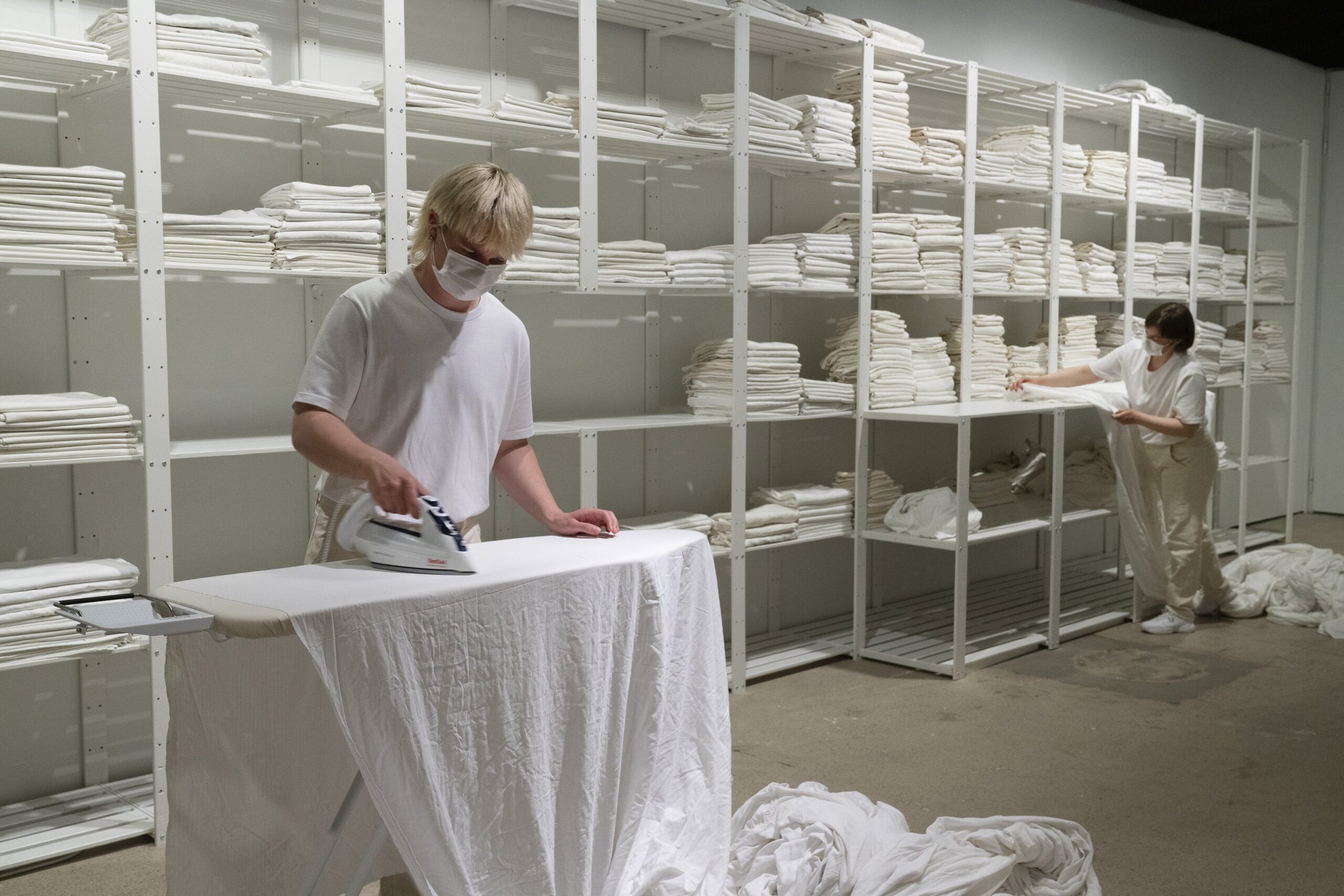 The exhibition is another step in our ongoing quest to question and reject old hierarchical patterns so as to create spaces of inclusiveness. In a world of dichotomies, of Us and Them, we find it urgent to unify, to define a common We, a global solidarity. To start all over again.

In a world defined by historical misdeeds that still spread their consequences into the everyday lives of us all, we all need to imagine other futures. To gaze towards tomorrow. We need to release the pendulum of plurality. The world of today is shaped by past occurrences and we are free to reshape it in other images. And thankfully, a lot of people all over the globe engage in such reimagining.

It is a common issue and it is not only limited to the subjects mentioned here. The structures of imagined superiority, exploitation and oppression are connected to many other urgent issues, like how we have treated our planet, nature, and other species throughout the past centuries.

The white non-color bears an inherent ambiguity. Besides conveying racial connotations it is also an unwritten sheet inviting us to start anew. The flags in The White Exhibition are now raised in truce to begin the negotiation, to capitulate, to refrain from fighting.

The performance to be conducted during the exhibition constitute an act of healing, a symbolic cleansing to make room for something new to emerge. It is a repeated ritual carried out by young people, their bodies present in the room, in the moment. The youth of the future, of hope, is creating space for a radically better tomorrow. Our faith lies with them; they hold the key.