Artworks from EMMA’s collections have been hung at Espoo’s daycare centres, schools and public offices during the spring. One of these locations was the Mayor’s Office of the City of Espoo and the study of the Mayor, Jukka Mäkelä. Jukka Mäkelä wanted his wall to have art that depicts Espoo and life in the city. His wishes were granted in the shape of Andamento, a painting by visual artist Birger Carlstedt (1907–1975).

During the pandemic, the Mayor of the City of Espoo Jukka Mäkelä has, like many others, been attached to the camera of his computer. “The look of the painting immediately brings a new element to my office. Carlstedt’s piece offers a streak of humanity into my everyday life,” Mäkelä says and points to a remote studio built into his room. The background of the studio is made up of a colourful map depicting Espoo’s natural areas, different regional centres and their identities, against which Birger Carlstedt’s painting settles like an abstract extension.

The name of the work, Andamento, has been borrowed from music theory, which is typical for Carlstedt. On the other hand, the term describing development and course signifies, in art, the placement of mosaic pieces into a visual flow. The completely abstract expression of form in the piece offers its viewer an opportunity for free association. The green-toned work, placed on the wall of the office, reminds Mäkelä of Espoo’s natural areas and the Tapiola from his childhood.

“I’ve watched the map based on the Espoo Story for so long that I’ve nearly used up my creativity with it,” Mäkelä jokes and continues: “Carlstedt’s work has the same elements as the map of Espoo. When Espoo’s citizens are asked what they value most about the development of Espoo, their reply is the nature in their living area.” Much as Carlstedt in his work, the map of Espoo also composes natural and living areas into a functioning entity. 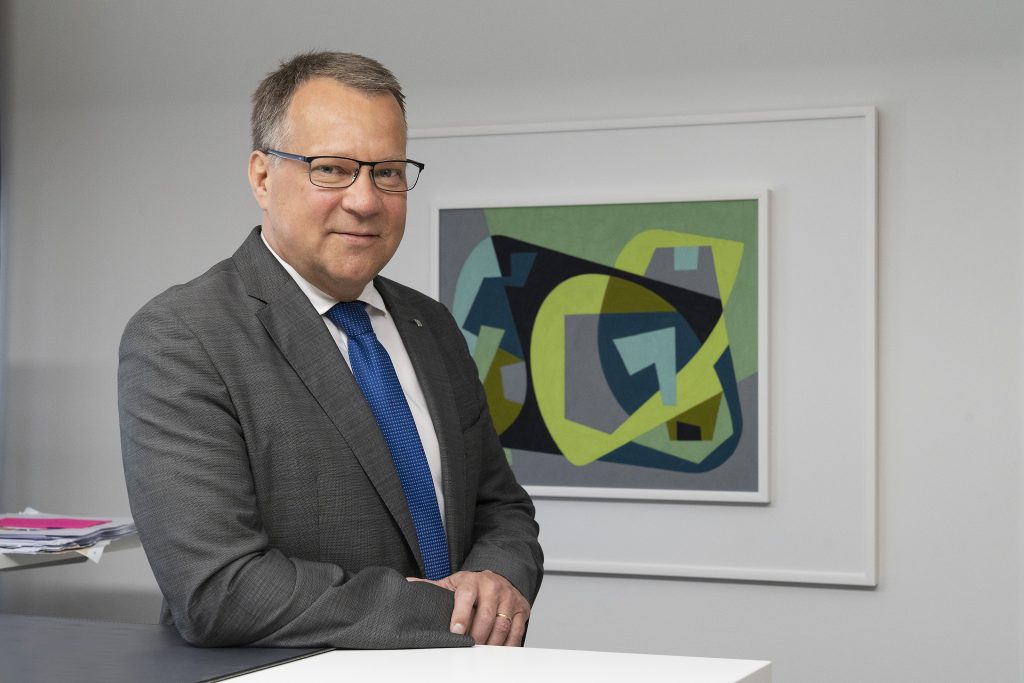 In addition to the office of the mayor, over thirty works from EMMA’s collections have been put on display at the premises of the Mayor’s Office. The shared spaces of employees have been a focus area in the placement of the works. Mäkelä reveals that he regularly walks on the halls of the office. “I feel privileged to be able to carry out such an art walk. It is like walking the halls of EMMA at WeeGee,” Mäkelä points out. “Abstract art looks a bit different every day. Colourful works also bring some soul into the walls of our multi-space office.”

Andamento, painted in 1955, represents the concretistic style where geometrical subjects turn into compositions, as is typical of its maker. The abstract artwork’s connection with Espoo opens up through history. The Helsinki-born and internationally oriented Birger Carlstedt had a strong connection with Espoo: he lived and worked at his family villa in Nuottaniemi, Matinkylä for years and also had a studio built in the yard.

Andamento also happens to be a prime example of the history of Espoo’s public art. The work was acquired in 1971 from a sales exhibition by Espoo’s visual artists to be hung at the wall of the freshly built City Hall, right next door to its current location. It was then was borrowed to the premises of the former school of Matinkylä for years, after which it was returned to EMMA and waited for its new display location in the artwork storage for a decade.

The work hung in Mäkelä’s room is one of approximately thousand works situated at public spaces in the city of Espoo. Read more on EMMA’s activities around long-term loans of artworks and trace Andamento’s path from the artwork storage to the mayor’s wall.